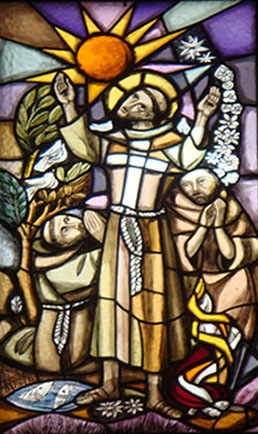 Many great saints have left us discourses of their journey to God. Francis of Assisi, however, speaks to us by his life much more than by his writings, and his wholehearted, enthusiastic practicality is a challenge to us today as we search for meaning and fulfillment in our way to God. He asked his Brothers to preach the Gospel and “use words if necessary”.

Francis did not live in a monastery, but among ordinary men and women, and in that world, he sought and found his God. The search was often through dark ways and demanded often radical changes of direction, but he sought and found his God through an incarnational approach—God was his loving Father, and all he had was a gift; Christ was his Brother, and the Spirit of that love lived in him. So his approach was Trinitarian, not static. Again, Francis was practical—the Crib, the Cross, and the Eucharist were his way to God, and finally his relationship to the Triune God led to an intimacy and familiarity with all wonders of creation, so that he could address them as Brother/Sister—all were members of the one family.

So Francis did not speak about spirituality so much as he lived his prayer—as an early biographer, Thomas of Celano said, “He became prayer,” and in the intimacy of his relationship with God he would have his followers join him. “Hold back nothing of yourself for yourself, so that He who gives Himself totally to you may receive you totally.”